Bring Back Our Girls

The plan was simple-- Our global concerns group that has been meeting all year to make connections with The Daraja Academy and raise awareness at our school about gender equality and girl's rights was going to kidnap all the grade 7 and 8 girls!

We wanted to raise awareness about the 200 girls who were abducted in Nigeria and shed some light on the #bringourgirlsback campaign. We also wanted to remind all the teachers and students in our school just how valuable our girls are!

Here's what happend after two weeks of planning:

First step was that we didn't tell anybody. We felt that the demonstration would be more convincing and effective if no one knew what was going. We wanted to catch everyone off guard. The girls were a bit nervous about not asking the teachers, as was I if I am to be perfectly honest, but we took a risk. There were a few teachers who were confused, frustated and annoyed, but for the most part most played along.

After reflecting on this event, I did realize that perhaps this was not the right precedent to set. There are so many passionate people at UWCSEA and so many amazing projects, that if every group pulled surprise stunts like this every week, our school would fall into ineffective chaos. I am glad, however, that we were able to do it this time.

Our intention behind the secrecy and the slight element of danger, was that I wanted the girls, both participants and organizers to realize that sometimes political activism involves taking risks and being unsure of the final outcome.

Sometimes to truly empower yourself, you need to demand a bit of power. And if you are not willing to sacrifice something, then perhaps you are not truly committed to your cause.

Most change occurs when people are courageous enough to shake up the status quo now and again, and put people in situation that feel uncomfortable in order to make them think differently. But back to our event...

At 8:15am eleven girls from our GC, went to every mentor group, eighteen total and asked if they could quickly talk to the girls in the class. That's roughly 180 girls! Once they were out of the classroom, they directed them all down to the tent plaza. I was so impressed both with the organizers and the participants for acting so maturely. 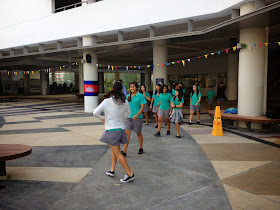 Before going down, they were told about the events in Nigeria and the work our GC does for girl's rights in Africa and at our own school.

As the girls were on their way downstairs, a member of our GC left this note for the teacher 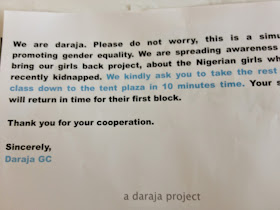 And cards in the place of the missing girls that said, "We have been kidnapped. Find us in the plaza." 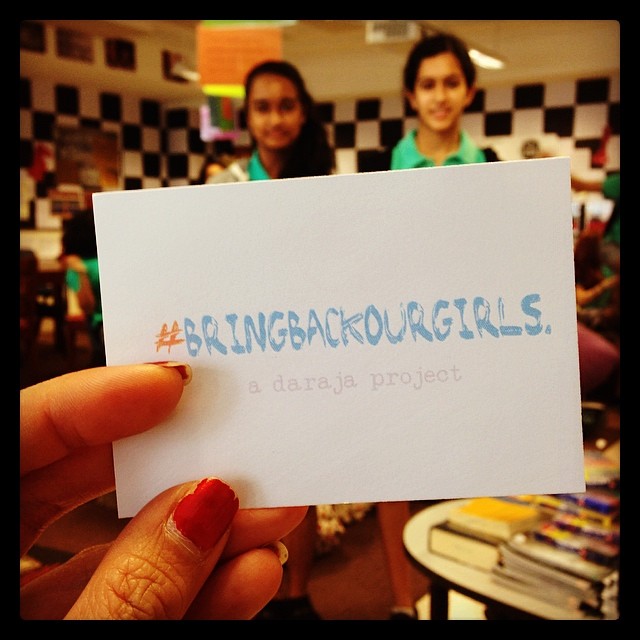 While the boys and the teachers were trying to figure out what was going on, the girls made their way to the plaza.

Once all the girls were downstairs and the boys and teachers came down, I read a message over the school PA system, stating that these girls had been kidnapped and would be sold into marriage at $12 a piece.

At which time the girls, who were holding signs that said, "How Much Are We Worth?" Began a call and response chant. With all 180 girls present. 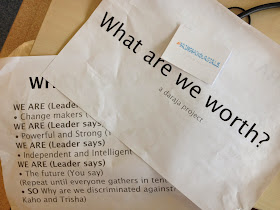 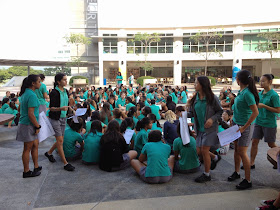 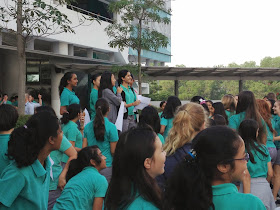 All in all, it was a beautifully planned and well executed demonstration. I am so proud of all the people involved. The organizers, the participants both boys and girls, and yes the grumpy teachers.

After the demo, we sent the following email to all the students in the middle school. so our intention would be clear.

You will probably, be wondering why all the girls in your class randomly left during mentor time.

This is because we, the Daraja GC have a mission to raise awareness about what happened in Nigeria, where nearly 300 girls were abducted from their boarding school at night by an Islamic militant group who believe western education is a sin. The coverage for this news has been hidden due to other major stories such as the South Korean Ferry accident and MH370’s disappearance. It is has come to our notice that not many people in our school are aware of our GC and this incident and so we decided to create a simulation to show the thoughts of the people at the time. Our GC, Daraja promotes gender equality and try to spread awareness of the discrimination based on gender specifically in Africa. As you know this incident took place in Nigeria and we came to realize that if this same incident took place in Europe or other such places it would be the biggest headline but due to this taking place in Nigeria it has been ignored to an extent.

We would like to take this opportunity to educated you on gender equality and incidents taking place around the world which a lot of people are unaware of. Our GC aimed to make the girls whom we “kidnapped” to be unaware to show them how when such incidents happen, they can be rather sudden and shocking but also at the same time we wanted to capture the students thoughts on the girls disappearing suddenly through this simulation. Our GC wanted to see what the reaction of the student body was and compare with the reaction to this real life incident. The group which kidnapped these girls claims to sell them for $12 which we found to be interesting and so we decided to ask what the girls are worth which leads us to the chants we did. We decided to answer the question for the girls in our school and show the student body what we believe girls are worth.
For further information on the #bringourgirlsback project:

Our GC also welcomes you to join next year if you are interested in our work against gender inequality. For more information on our GC, contact Mr. Raisdana. 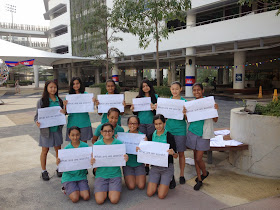 So now, we would love to hear from you. What did you think? How did you feel? What will you take away? Was it worth it? Was it effective? Why? How?